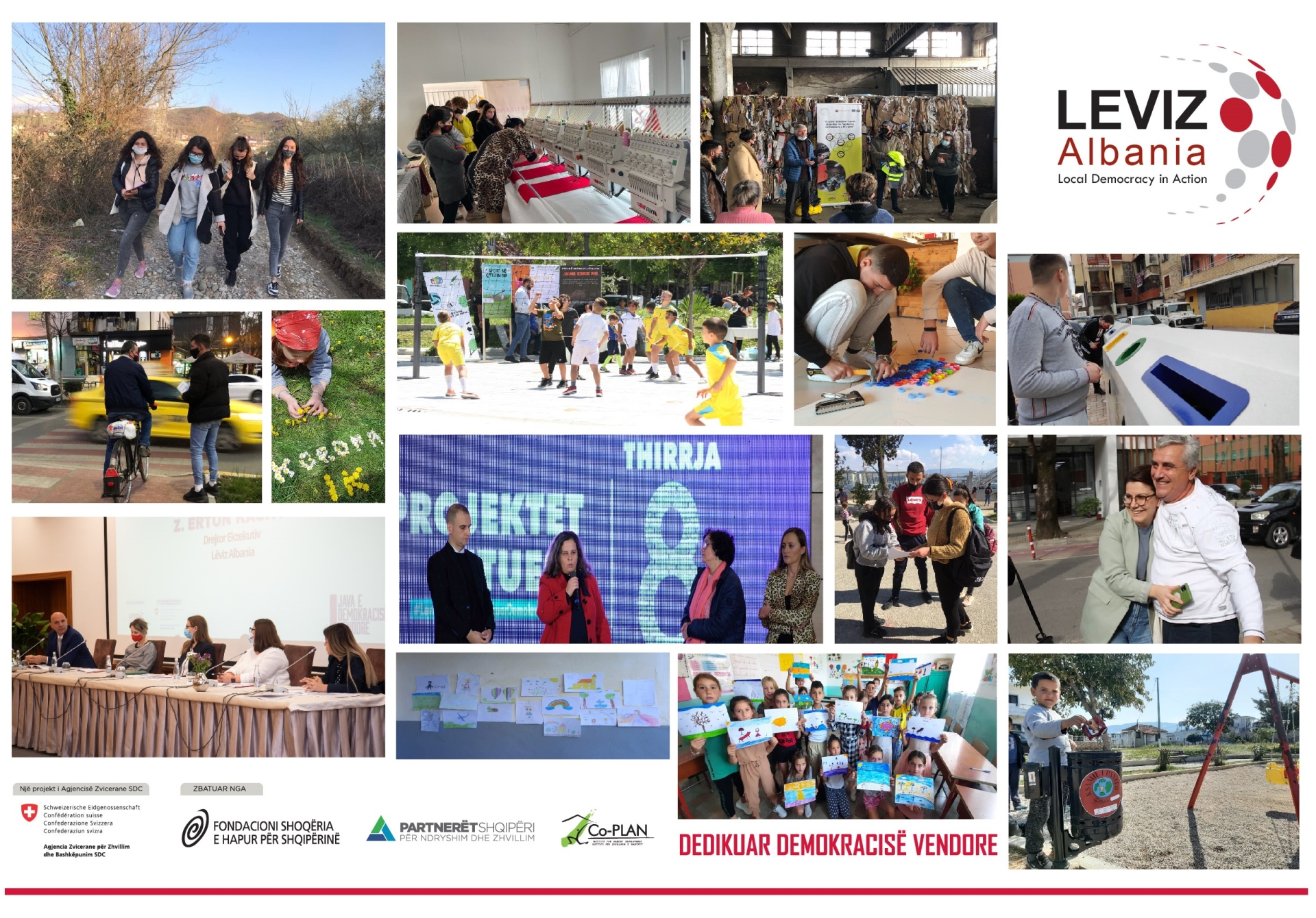 Mid-way through the implementation of its second phase, LevizAlbania has formed a critical mass of active citizens, interest groups and CSOs that participate and influence local government action. About 40% of supported civic actors report that they continue to carry out initiatives in the benefit of local communities, 12 months after grant support is concluded, providing evidence of long-lasting impact and sustainability. This is a major achievement considering the context is hindering civic engagement and financial viability of civil society.

The contextual trends pointing at weakened citizens’ engagement and participation in decision-making, public consultations and protests, a non-enabling environment for civil society and other democratic setbacks have continued to be present over the reporting period. The latest developments surrounding the Law on “Registration of Civil Society Organizations” and the recent Law on “Co-Governance” raise red flags pointing to concentration and increased governmental control on actions of and interactions between citizens, interest groups, CSOs and the governmental bodies at both central and local level..

In this challenging context, LevizAlbania has continued to work with a wide range of different actors in the civic space to drive change and incite local government to take action in the benefit of citizens.

Empowered civic actors are achieving social change by resolving issues of interest to local communities, forming a critical mass of active civic actors. A total of 332 individuals, informal groups and CSOs have received LevizAlbania support since 2015. Their initiatives have incited a total of 207 actions and reactions from local government in response to a strengthened demand for better local governance amounting to 653 concrete demands and proposals raised by citizens themselves, mobilized through the different LevizAlbania instruments.

LevizAlbania granting mechanism is recognized widely as innovative, competitive and transparent. Through 8 Calls for Applications (CfA) we have received more than 2,270 applications from a diverse group of civic actors’ country-wide, out of which 283 projects have been supported. The practice of public Idea Competitions, an innovation aimed not only at transparency but also for interaction among applicants, is highly regarded as a crucial moment and an important motivating experience by many of them. Throughout these Calls nearly 700 applicants have presented an idea to the Grants Board over 24 Idea Competitions organized in 15 different locations. The outreach of LevizAlbania has extended to practically every municipality in the country.

During the reporting period (July 1 – December 31st 2021) 32 grants were contracted, bringing the total number in Phase II (July 1, 2019 – June 30, 2023) to 117, by involving 166 different civic actors. As a reference for comparison, in Phase I LevizAlbania granted a total of 166 projects. Until the end of the reporting period 53 grants have completed their activities and have been closed. Overall, LevizAlbania has contracted 3,335,865 CHF for the implementation of demand-driven interventions and VASS during the Phase II.

LevizAlbania has continued to enable civic actors by:

During Phase II, LevizAlbania has managed through its interventions to reach 54 municipalities. LevizAlbania has closely monitored and systematically followed up on the outcomes achieved by each of its supported civic actors. Information collected through different means of verification provide evidence for the following:

The experience gained by the grantees during collaboration with LevizAlbania project, has also been thoroughly assessed. LevizAlbania’s approach and support are highly valued by grantees as a real and practical influence towards capacity and sustainability building.

In the frame of the efforts for establishing a Knowledge Management system, LA has traced the sustainability of activism and of initiatives, 12 months after the end of support. About 40% of supported civic actors continue to carry out initiatives in the benefit of local communities after support is concluded, providing the first hints of evidence of sustainable long-lasting impact.  This is considered as a major achievement, taking into account the challenging contextual developments hindering civic engagement and financial viability of civil society. Within those grants with limited sustainability, the project team is currently identifying factors influencing sustainability and lessons learned. Key motivators and constraints develop from the background characteristics and traits of different grant recipients which, along with other context singularities, determine the effectiveness of what LA offers and the degree of sustainability achievable.

The External Mid-Term Review (MTR) of LevizAlbania project, as foreseen in the Phase II Project Document, took place in the Fourth Quarter of 2021. The Embassy of Switzerland in Tirana mandated a team of external independent consultants (one international and one national) to perform an External MTR, in accordance with SDC regulations.

Over the next six months LevizAlbania will focus in the awarding process and contracting of grants through the last periodic CfA for Phase II. In addition, the project team will continue working with on-going grant recipients and partners in the implementation and reporting of the grants currently active, systematically monitoring its outcomes during and after the projects’ periods.  In doing so, LevizAlbania will continue to monitor closely the context developments in order to be able to “react” and adapt to new challenges, using its instruments. Particular attention will be paid to the development of the pandemic in order to have a well-thought reflection and reaction in cooperation with the donor.

Additionally, LevizAlbania will finalize the Knowledge Management Framework to ‘produce’ knowledge conducive to better local democracy and enhanced civic engagement in Albania.  In terms of leverage and dissemination of knowledge, different seminars have been planned as outreach and engagement activities.

Based on the MTR’s relevant recommendations, as well as information from internal reflection processes, LA is currently entering a new learning cycle to be fed by its own first-hand experience as well as on a solid Knowledge Management system.

The organization of Local Democracy Week 2022 will build up on these efforts and include a wide range of innovative activities enlarging the opportunities for open dialogue between diverse groups of different civic actors and stakeholders in Albania.

Finally, LevizAlbania will continue to nurture the collaborations and synergies with other projects, in addition to taking part and contributing in the building of a community of practice.